Following the strong interest generated by the first Lexus Design Award, with more than 1,300 applicants from over 72 countries worldwide, Lexus today announces the launch of its second Design Award competition.

The Lexus Design Award is an international competition targeting designers from a wide range of creative fields such as architecture, fine art, fashion and product design. Through this initiative, Lexus aims to nurture creativity in, and provide support to, the next generation of designers around the world.

The theme of the Lexus Design Award 2014 is Curiosity.  At Lexus, a great deal of time is dedicated not only to improving design but also considering its impact on the world. Applying curiosity in a creative manner can generate unexpected innovations, resulting in exciting products that may change the lives of customers.

A shortlist of 12 winning entries will be selected by a jury of 6 experts. From this shortlist, two finalists will receive the unique opportunity to create a prototype in collaboration with world-famous designers. For the 2014 Design Award, the two finalists will work with the American game designer Robin Hunicke or Taiwanese architect Arthur Huang as their mentors.

The 12 winners are to be announced in early 2014, and their works will be exhibited to the media and the public in the Lexus Exhibition Hall during Milan Design Week, which runs from April 8th to 13th 2014.

The application period starts today, remaining open until October 15th, 2013. Applicants should apply via a dedicated page on the designboom website: http://www.designboom.com/competition/lexus-design-award-2014

Call for Entries to the Lexus Design Award 2014 Competition

Antonelli joined The Museum of Modern Art in 1994 and is a Senior Curator in the Department of Architecture and Design, as well as MoMA's Director of Research and Development. Her first exhibition for MoMA, Mutant Materials in Contemporary Design (1995), was followed by Thresholds. She has lectured the World Economic Forum in Davos, and she has served on several international architecture and design juries. Her goal is to insistently promote understanding of design, until its positive influence on the world is fully acknowledged and exploited. She is currently working on several shows on contemporary design; and on Design Bites, a book about foods from all over the world, appreciated as examples of outstanding design.

Originally from the United States, Chen is the newly appointed Curator of Design and Architecture at M+, the future museum for visual culture in the West Kowloon Cultural District of Hong Kong. Before that, he served as Creative Director of Beijing Design Week in 2011 and 2012. He had earlier been an independent curator and design writer in New York, contributing to dozens of publications including The New York Times, Metropolis, Fast Company, Architectural Record, and PIN-UP.

Graduated with a bachelor's degree in art and design, from Tama Art University.

He has successfully held various positions in many design related divisions of Toyota Motor Corporation, leading to his current position as the Executive Vice President of Lexus International.

Ito graduated from the University of Tokyo, Department of Architecture in 1965. Main Works: Sendai Mediatheque, Tama Art University Library (Hachioji), The Main Stadium for the World Games 2009 in Kaohsiung (Taiwan R.O.C). Under development: Multimedia Complex on the site of Gifu University's School of Medicine (tentative), Taichung Metropolitan Opera House (Taiwan R.O.C), etc. Among his many honors are Architectural Institute of Japan Prize, Golden Lion Award for Lifetime Achievement from the 8th International Architecture Exhibition “NEXT” at the Venice Biennale, Royal Gold Medal from The Royal Institute of British Architects and The Pritzker Architecture Prize.

Born in Hamburg. Lohmann studied industrial design in Florence before moving to Milan, where she has lived and worked since 1987. She worked as a designer and product development manager for a number of Italian architects and master designers. She has also worked as a design historian for justice departments and international auction houses. As a researcher and lecturer, she has conducted seminars on industrial design at a number of prestigious international universities. In 1999, she co-founded designboom, where she is currently the Chief Editor, Head of Educational Programming and Curator for International Exhibitions.

Alice Rawsthorn is the design critic of the International New York Times. Her weekly Design column – published every Monday – is syndicated to other media worldwide.  Alice is a trustee of the Whitechapel Gallery and the Michael Clark Dance Company, and chair of trustees at the Chisenhale Gallery.  Her latest book, the critically acclaimed “Hello World: Where Design Meets Life”, published by Hamish Hamilton, explores design’s influence on our lives: past, present and future.

Educated in Cornell University’s B-ARCH and Harvard’s Graduate M-Arch II programs, Huang developed a multi-disciplinary maker-doer ethos at a young age inspired by history, structure engineering and biology. With no industry precedents in sight, he decided to start a company to pioneer the transformation of universally accepted carbon minimizing concepts into physical products/materials. Huang established MINIWIZ in 2005 in New York and in 2006 in Hong Kong. Since then, the company has grown into an international eco-material, building-module and design company.

Robin Hunicke is a game designer and producer, with a background in fine art, computer science and applied game studies. Her titles include the award-winning PSN downloadable title, Journey, Steven Spielberg’s Boom Blox series for the Nintendo Wii, MySims, and The Sims2. In the fall of 2012, she co-founded Funomena, an independent game development studio in San Francisco. Recognized as an influential Woman in Games, Robin is an evangelist for diversity of thought and participation in game design and game culture. She promotes the MDA approach to game design, co-organizes the annual Experimental Gameplay Workshop, has chaired the IndieCade Festival of independent games.

With the vision of Progressive Luxury, Lexus has been pursuing and presenting values different from those of conventional luxury makes. Lexus has been striving not only to create a more luxurious experience through automobiles, but also, through such technological advancements as the Lexus Hybrid Drive, to contribute to efforts to solve numerous issues that have surfaced in the modern world.

Lexus believes that design for this competition goes beyond mastery of form and is a process in problem solving and an effort to propose solutions to shape a better society and future. Lexus therefore welcomes a wide variety of innovative ideas to overcome challenges. 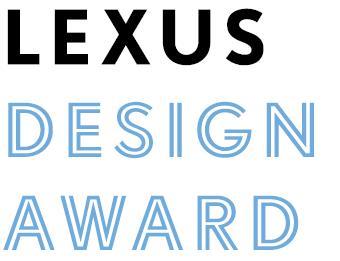